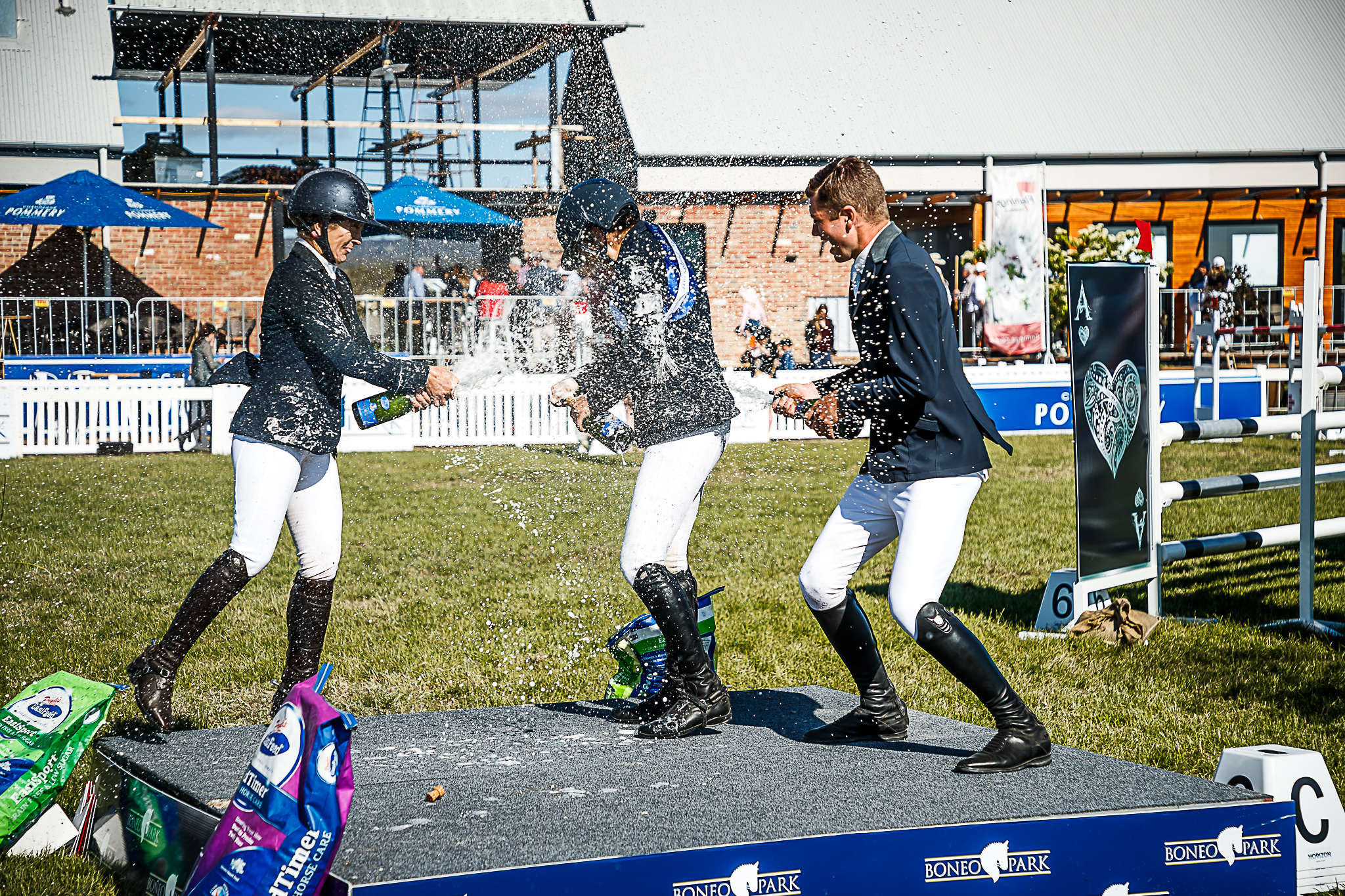 The Horseland Australian Senior Championship was the final class and the climax of the 2018 Pryde’s Easifeed Australian championships, held this afternoon at the beautiful Boneo Park Equestrian Centre.

A huge crowd gathered completely encircling the magnificent ring to watch the finest showjumpers compete in what is the highlight of the Australian Jumping Calendar.

After two preliminary rounds earlier in the week, combinations were ranked based on their performances, with the top 20 invited to compete in today’s final. It was a strong contingent of competitors who made up the final start list.

Combinations in today’s final carried forward penalties (CFP) based on their performance in the preliminary rounds. Click HERE for an explanation of how these CFPs were calculated.

This table details the starting position of each combination that competed in today’s final: 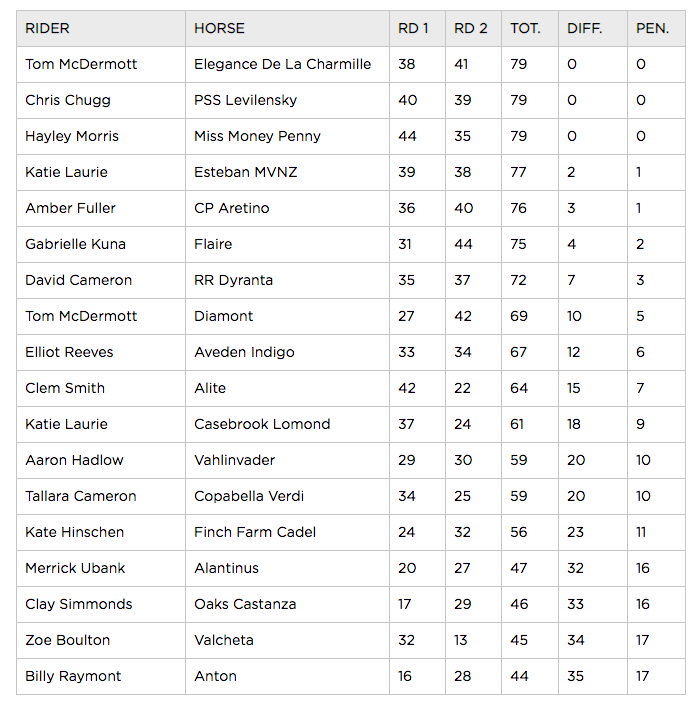 With three combinations tied in the lead and a further four combinations within four penalties of the lead, the competition could not have been tighter. To win today would require nerves of steel, combined with supreme technical skills and a fair quantity of luck.

The Senior Title final was conducted over two rounds. In the first round, all combinations rode in an attempt to either consolidate their position, or to force their way up the leaderboard and into the top 15, to qualify for the second round. 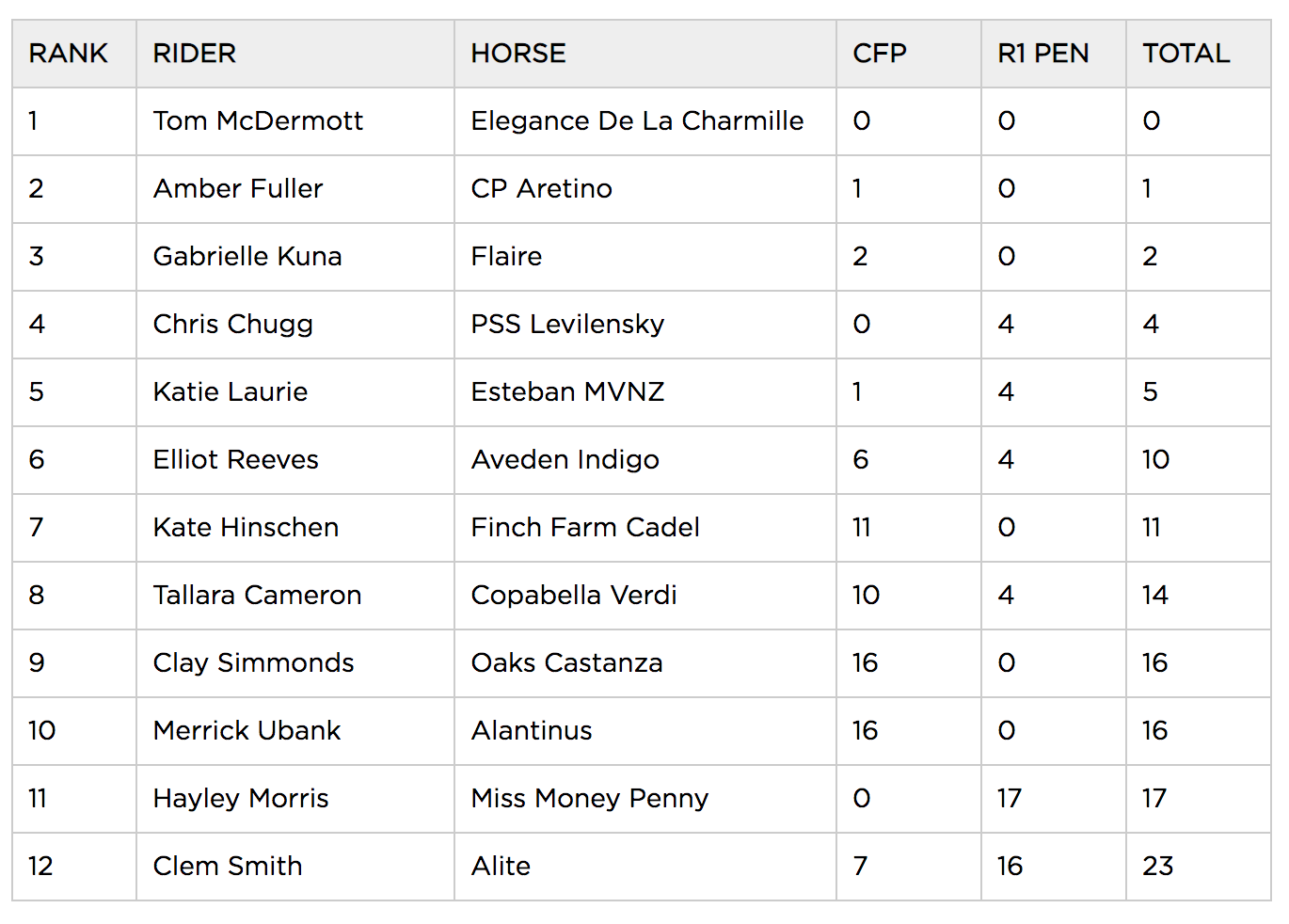 First out to tackle the Round 2 course, was Speed Championship winner Clem Smith, this time riding Alite in a clear round to remain on 23 penalties. All he could do now was wait and hope that the other 11 competitors fell by the wayside. Next combination out, Hayley Morris and Miss Money Penny failed to finish the course and were eliminated.

Third out was Clay Simmonds and Oaks Castanza, who took a rail to finish with 20. He fared better than the other combination starting on 16, Merrick Ubank and Alantinus who took two rails to finish on 24 penalties.

Tallara Cameron and Capabella Verdi were the next to go, however a few rails down and a time penalty added 23 penalties to their score to put them out of contention.

The next three combinations, Kate Hinschen and Finch Farm Cadel, Elliot Reeves and Avaden Indigo, and Katie Laurie and Esteban MVNZ, all did little to assist their title chances by each adding four penalties to their score.

It was now down to the last four combinations on four, two, one and zero penalties respectively, to fight it out for the title. Who would flinch? Who could produce a perfect round under the utmost pressure to take the title?

First of the final four was Chris Chugg and his gelding PSS Levilensky who started on four penalties, but took a couple of rails to take them to 12 penalties and drop them into fourth place.

Gabrielle Kuna and the flashy mare Flaire were next. Kuna had to hope that she went clear and that the last two combinations made mistakes, however it was not to be. They took a rail and went to six penalties. Still in with a hope of winning, but a place in the top three guaranteed. 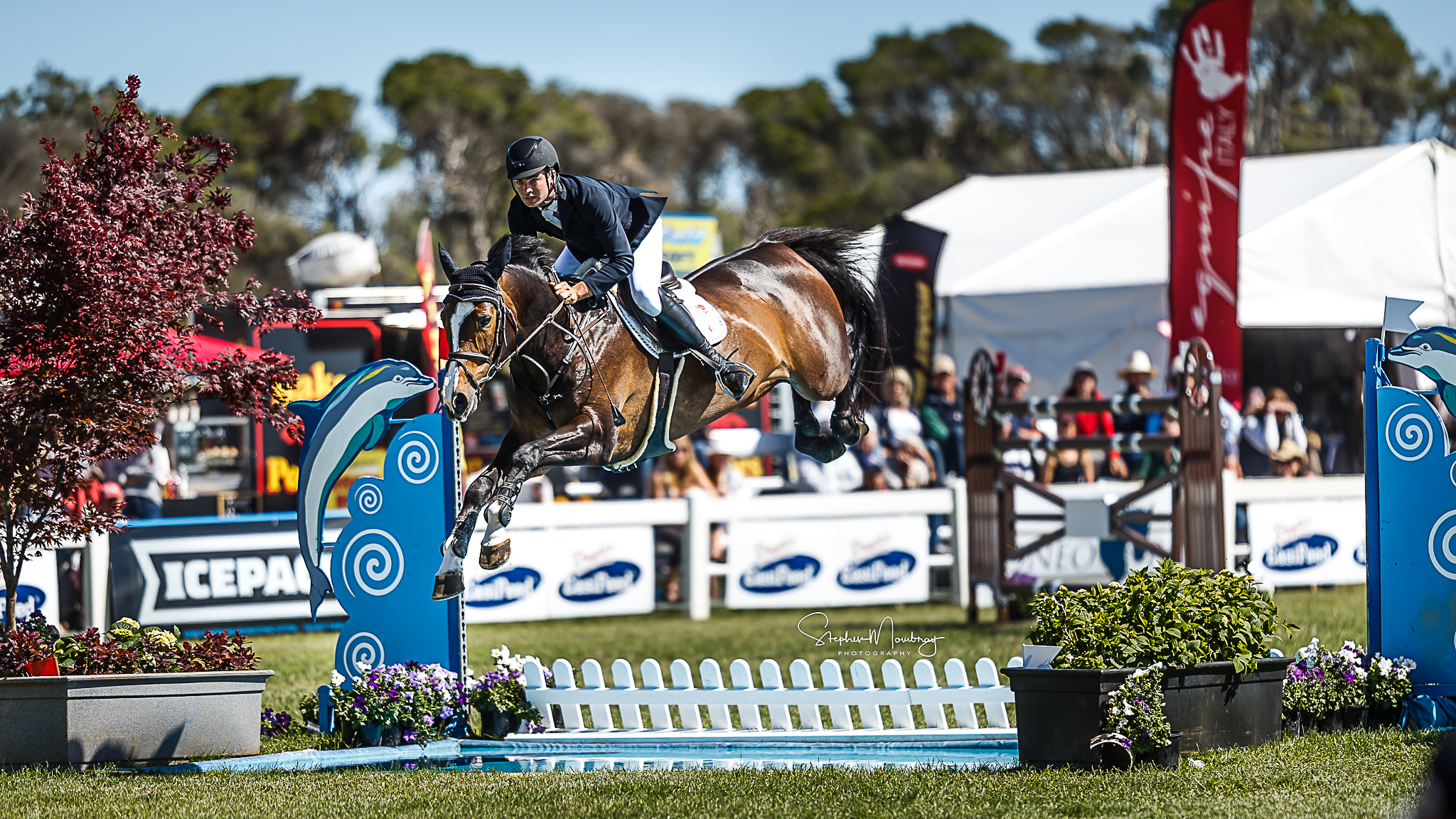 Two to go, and by now the crowd were enthralled with what they saw unfolding.

Amber Fuller and CP Aretino were next. If they could go clear they would really put the pressure on the final combination. They rode a careful, clear round which had the crowd cheering. Only after it all looked good for them, it was announced over the PA that their time of 72.48 seconds had exceeded the time allowed of 72 seconds. They were now on two penalties, which meant that although they were provisional leaders, they had just slightly decreased their chance of victory.

Just one to go!

To the strains of John Denver playing over the speakers, Tom McDermott and Elegance De La Charmille cantered into the ring as the tension in the crowd grow to a fever pitch. For the third time today, a national championship had come down to the last rider. McDermott knew what he had to do. Complete the course and incur no more than one penalty and the Championship would be his.

They did a quick trot around the arena to check over the new course and set sail at a rate of knots towards the first, as per McDermott’s usual style. But this time, the NSW Senior Champion didn’t fly towards victory. To the groans of the crowd, they took a rail at the first and their title chances disappeared as quickly as the rail fell to earth. However, with still plenty to ride for, McDermott and his mare completed the course without further problem with the four penalties added securing them second place. 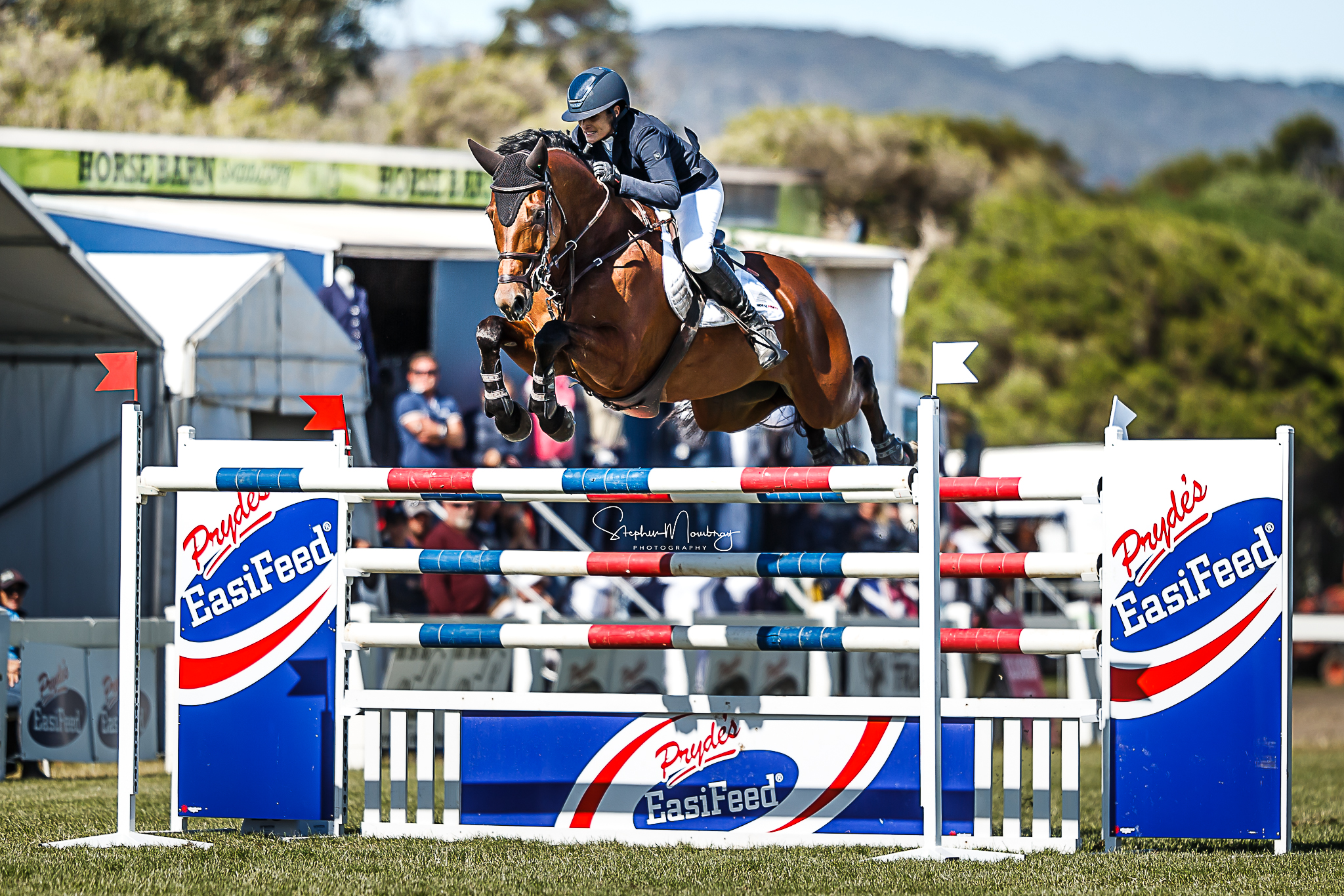 Congratulations goes to Amber Fuller and her gelding CP Aretino. As it turns out CP Aretino is a full brother to the mare JT Valentina, who carried Madeline Sinderberry to victory in the Junior Championship earlier in the day. This carries on a successful run at the Australian Championships as these two horses are also full brother and sister to the horse which Sinderberry rode to victory in the Young Rider Championship last year, Fernhill Zinzan.

Australian Jumping extends its congratulations to all the placegetters in what has been an exhilarating Championship. 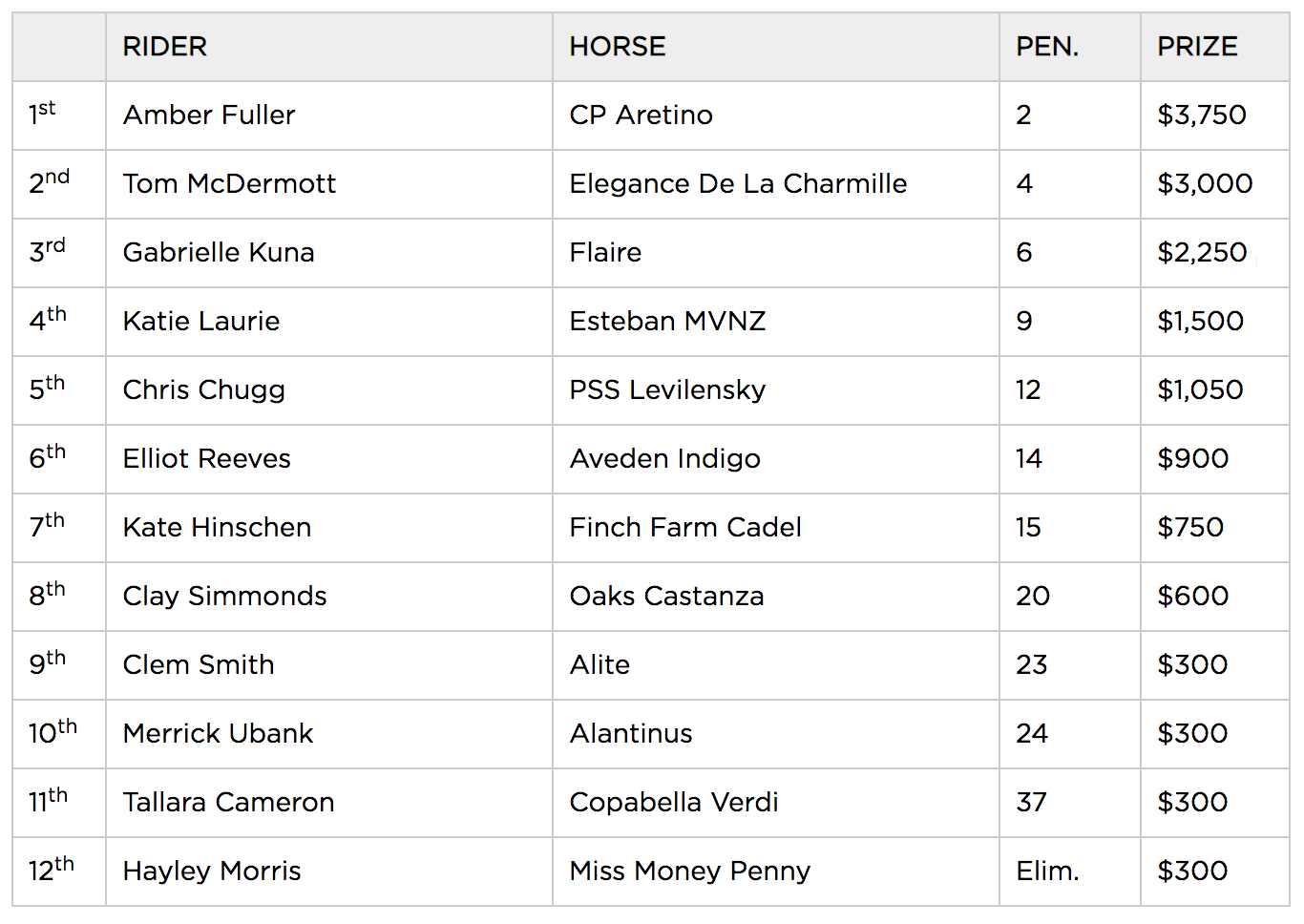 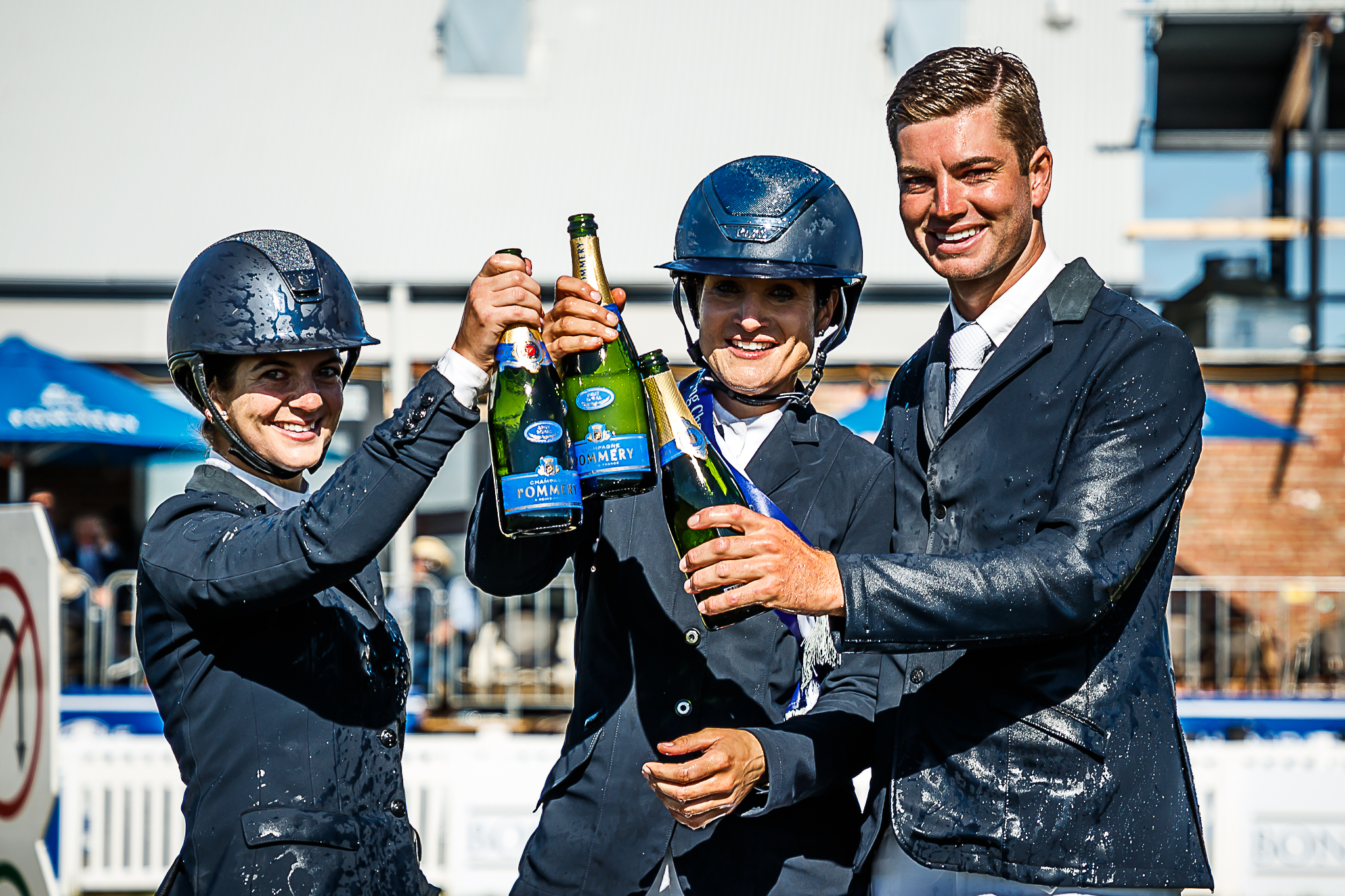