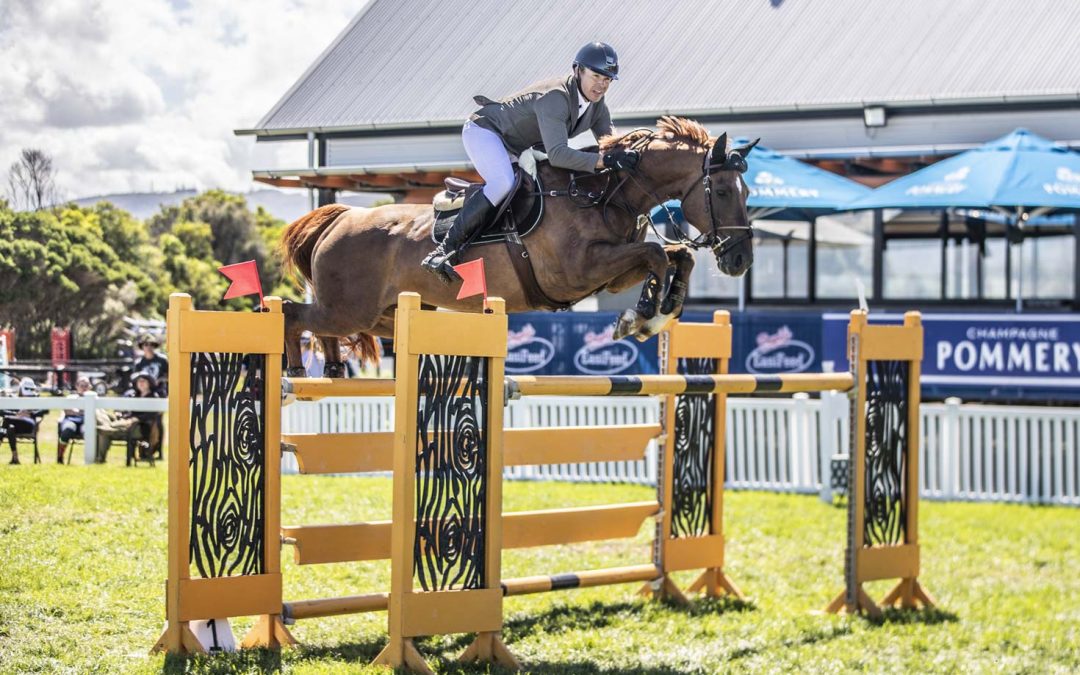 The action on the Pryde’s EasiFeed Main Arena got underway this morning with the second round of the Racing Hearts Australian Young Rider Championship. Of the 26 combinations entered. Only five could go clear, setting up a thrilling jump off. Taking the win in a double clear performance and a time of 38.97 was Amelia Douglass and Sirius Du Granit. Also double clear in second was another NSW rider, Bella Du Plessis and Monte Carlo MVNZ in 43.57 seconds. Third place went to South Australian Conor Reed and Leopoldo MVNZ in 43.68 seconds. Douglass and Sirius Du Granit head the leaderboard going into Sunday’s final and will be the only combination to start on zero penalties. 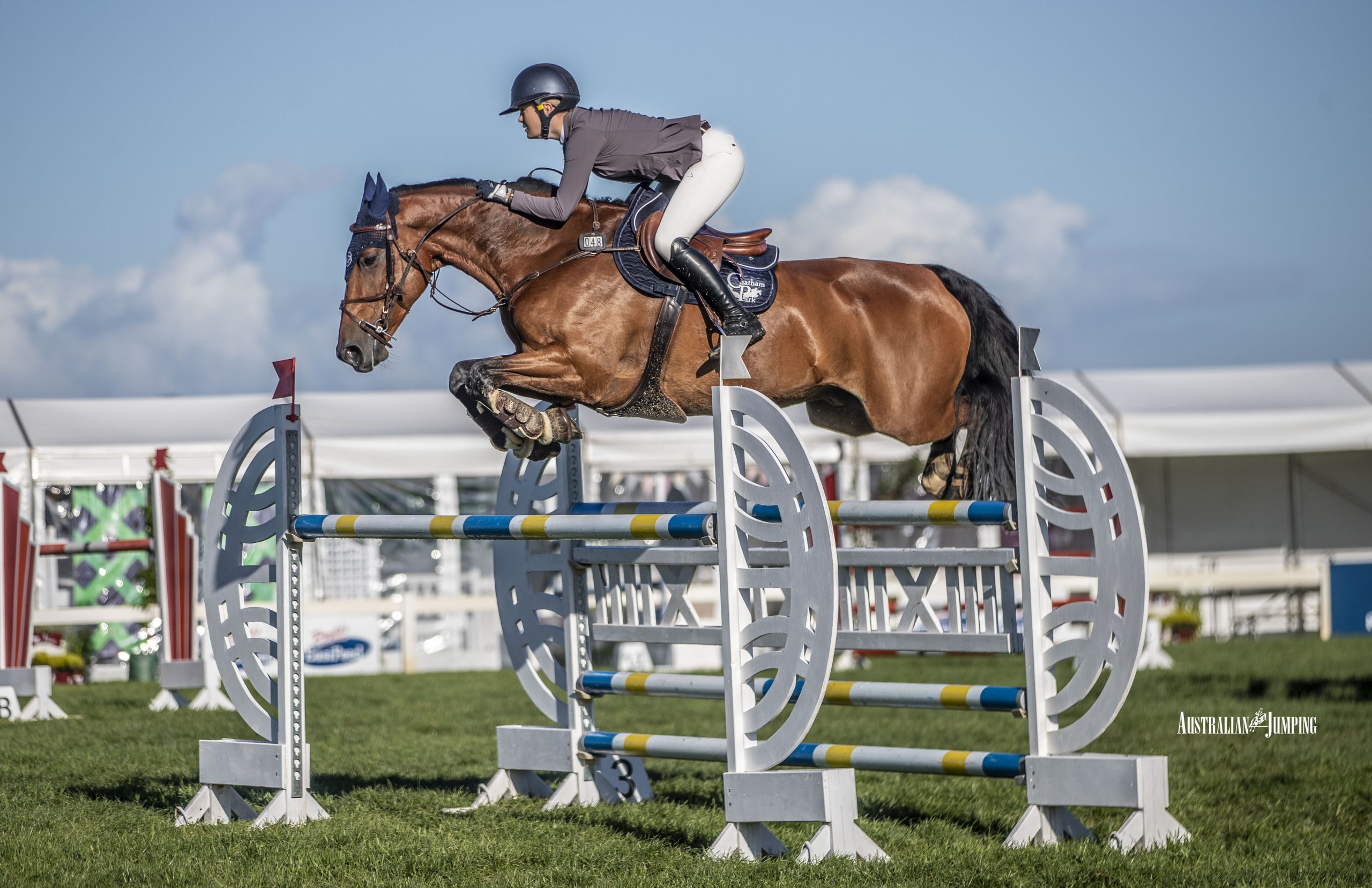 The state competition was held in conjunction with the Young Rider Championship, based on two rounds of competition. The NSW Team took the title over both Victoria and Queensland. The team was dominant with three of their combinations finishing higher than any team member from any other state. With the best three performances counting, NSW had the luxury of utilising a drop score to maximise their total.

The second class on the Main Arena was the second round of the Pryde’s EasiFeed Australian Senior Championship. All 28 combinations in today’s start list, just like the Young Riders before them, were looking to finish as high up the results table as possible, to ensure the best starting position in Sunday’s final. Over a course that the competitors found challenging, there was only one combination able to go double clear. That honour and the win went to Queenslanders Sam Overton and Oaks Cassanova with a jump off time of 47.59 seconds. Yesterday’s Round 1 winners Chris Chugg and Cera Cassiago were second with a single jump off rail in 44.27 seconds. Olivia Hamood and Jane Fonda DVD, who placed equal second in the 2019 Championship came in third in 45.30 seconds. Chris Chugg and Cera Cassiago will go into Sunday’s final on zero penalties, having performed near perfectly in the Rounds, coming first then second. 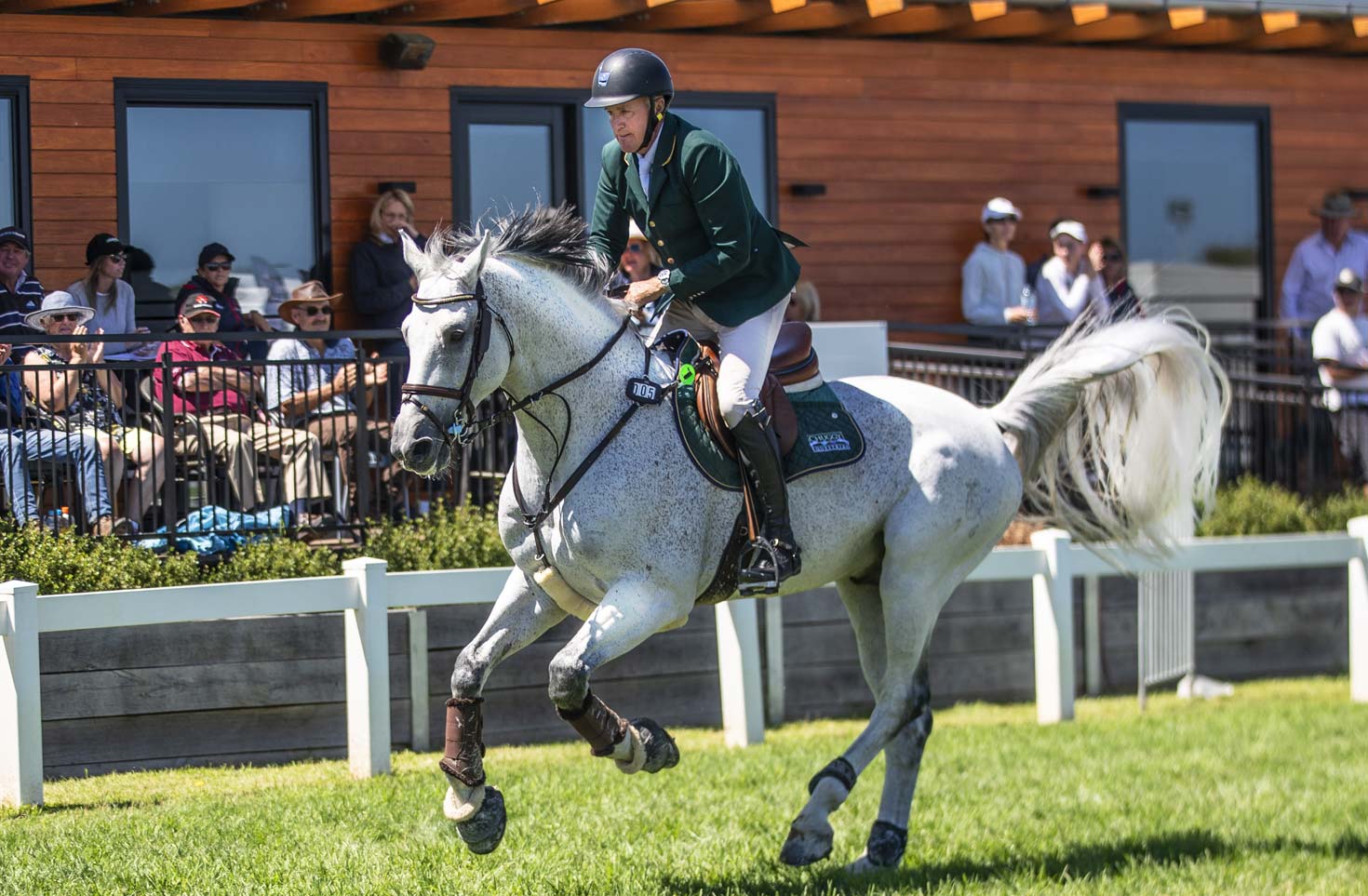 In the Senior State Competition, the win went to Queensland over both Victoria and New South Wales. With three of their four team members currently sitting in the top 10 on the Series leaderboard, they took the title convincingly. The Victorian team finished second, managing to knock NSW back to into third place in a reversal of the finishing order from this morning’s Young Rider Competition.

The action wrapped up today on the Pryde’s EasiFeed Main Arena with the second round of the Horseland Australian Junior Championship. An even 50 combinations entered the class producing 13 clear rounds, which created an exciting jump off, which saw five double clears. Fastest of these and taking the win was Anneliese Wansey and Aveden Indigo, with a time of 37.52 seconds. It was very close for second. Lorna Reilly and Bellhaven Jazz, were second in 40.04 seconds and third went to Clemency Hughes and Diamond B Corvina, just 0.05 seconds behind in 40.09 seconds. Having finished third and sixth in each round Wansey and Grandiamo will head into Sunday’s final at the top of the leaderboard and therefore on zero penalties. 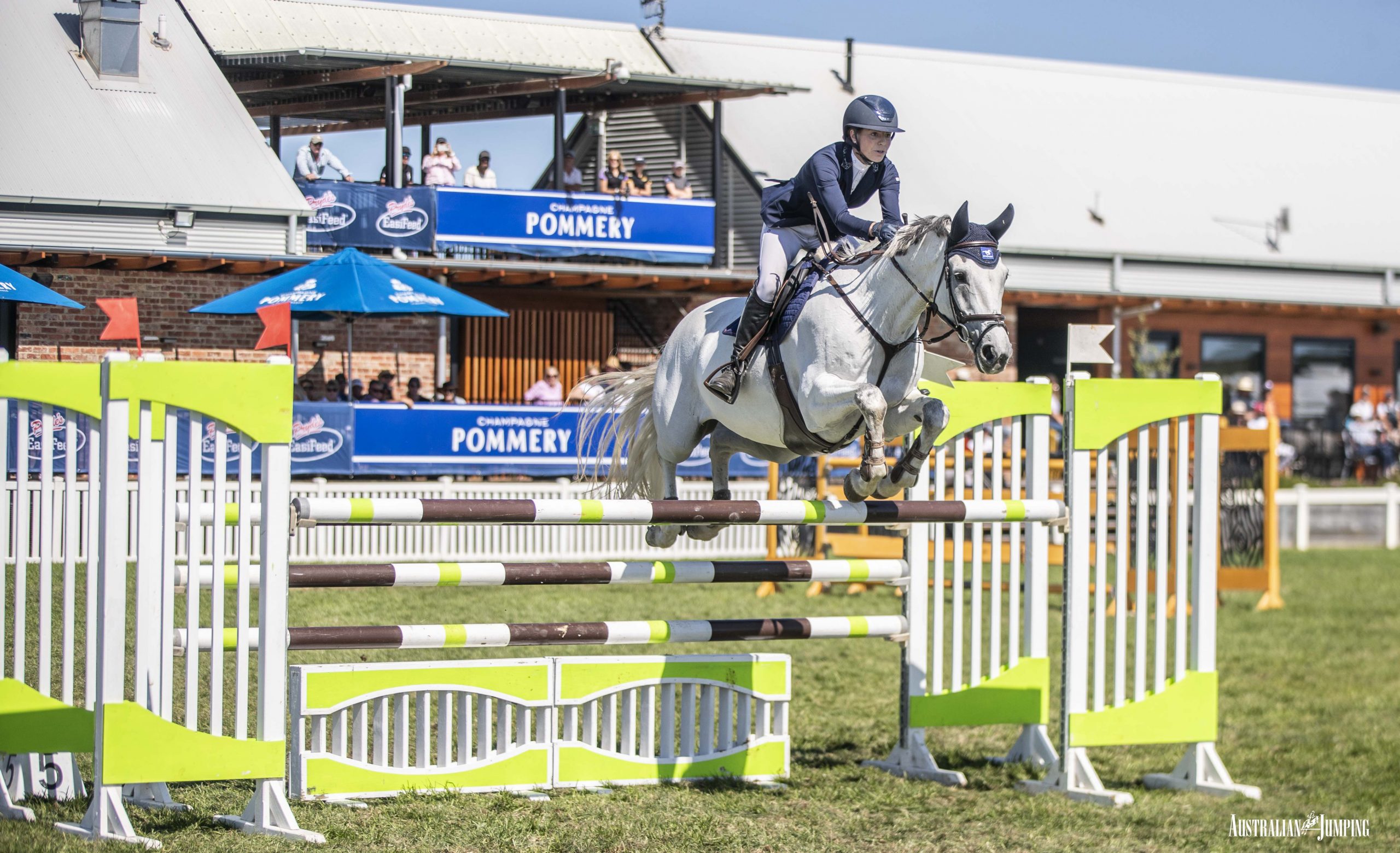 The Junior State Teams competition was won by Victoria from NSW, Tasmania and Queensland. With three of their four team members sitting in the top eight on the Series leaderboard after today’s second round, they took the title convincingly. The NSW Team finished second, and the team from Tasmania came in third, despite them being a three-combination team and not having the luxury of a drop score. With a win to NSW in the Young Rider Competition, Queensland in the Seniors and now Victoria in the Juniors, it looks as if there is a great spread of Jumping talent across these three states.

Round 2 of the Equestrian Victoria Amateur Series was the first class conducted on the Arilla Sand Arena this morning. Twenty-two combinations were involved in a jump off which saw Simar Singh and Bolong Park Cervachi take the win, the fastest of 14 double clear performances in a time of 33.64 seconds. Chelsea Hair and Cheech BFD were second in 33.80 seconds with the winners of Round 1, Kelly Lees and Ohio Silver, taking third today, in a jump off time of 33.92 seconds. With just 23 combinations heading into Saturday’s final, Lees and Ohio Silver will do so atop the leaderboard.

The next class on Arena 2 was Round 2 of the Vranken-Pommery Australia Ruby Series. Run as a speed class it was NSW rider Rhys Stones and ES Ella, who showed the way, leaving all the rails in place in a time of 57.68 seconds. Going one better than their third place in Round 1 was Victorian combination, Kate Beadel and Lily Elmare, finishing in 59.24 seconds. Finishing third, over a course which was obviously to his liking, was Rhys Stones and PPP Seductor. Kate Beadel and Lily Elmare will go into Sunday’s final on top of the leaderboard after podium placings in both rounds.

Following on from the Ruby Round, we saw the Wessell Drilling Open 110cm class. The competition was won by Billy Raymont and Tulara For Quinar in 37.61 seconds, one of five double clears in the class. Second place went to Sarah Weiss and Waratone in 39.81 seconds, with Brook Dobbin and Devos GP filling third, with a time of 40.59 seconds.

Run in conjunction with this class was the second round of the Racing Victoria Off The Track Championship. Restricted to retired thoroughbred horses, this class was taken out by Strobe Knox and Summer Delago in a fine double clear performance, with a jump off time of 38.59 seconds. Summer Delago, is a 12-year-old mare who retired from racing almost 7-years-ago. She raced 17 times for just a single win (at Stony Creek) and two seconds, accruing over $18,000 in prizemoney. Sarah Weiss and Waratone claimed second place again in this class. Their jump off time was 39.81 seconds. As they did in yesterday’s first round, third went to Katie Clark, from South Australia and Katelle Grand who finished in 41.28 seconds. Katie Clark and Katelle Grand will go into Sunday’s final at the top of the leaderboard.

Three open height classes were conducted on Tulara Warmbloods Arena 3 this morning. The Loghaul Open 115cm competition was the first class decided. Going double clear, the win went to South Australian, Mark Lindh and Seute Deern, with a jump off time of 55.31. Second, also double clear, just 0.08 seconds slower was Paige Johnston and Lilivale Falks Prince. In third was Victoria Hoy and Tulara Forini, who took a rail in the jump off while taking 59.18 seconds to complete the course.

The next class decided was the Horse Courier Open 125 cm class and with only a small start list comprising of 10 combinations, one rider dominated. Recording a clear round in 69.63 seconds, the win went to Murray Lamperd and Secret Mojo. Second place also went to Murray Lamperd, this time in combination with Lushious Lourdes, clear in a time of 73.97 seconds. Mark Lindh and SIX PACK secured third in 77.93 seconds.

Action on the Tulara Warmbloods Arena 3 wrapped up with the completion of the Flemings Nurseries 135cm Open class, which had only five combinations on the start list. There was just one clear round and that meant that the win went to Murray Lamperd and Sebastian, finishing in 68.02 seconds. In second place, with four faults, was James Harvey and Patangas Hiccup in 70.84 seconds, while in third place was Jessica Grove and Red Sambucca.

On Arena 4, the second rounds of three Series were held. The second round of the Heiniger Ivory Series was the first class completed. A total of 50 combinations produced 23 clear rounds, creating an exciting jump off. Going double clear in a time of 25.14 seconds gave the win to yesterday’s Round 1 winner Zara Adnams and Elcarium Starlight, who now are at the top of the leaderboard. Second place went to Ava Kennedy and Piper Arrow in a time of 26.94 seconds, with Ava Harrington and Miss Demenor third in 28.10 seconds.

Next up was the second round of the Yandoo Equestrian Pearl Series. Conducted as a speed round, Ava Kennedy and Piper Arrow  managed to go one better than their second placing yesterday, by winning in a time of 49.67 seconds. A very close second place went to Tayla Anderson and Rimondi D, also clear in a time of 49.74 seconds. Queensland visitor, Lorna Clifford and Kahean Trooper Nelson, were third, taking 50.19 seconds to complete the course. Ava Kennedy currently tops the Leaderboard with Round 3 of this series scheduled for tomorrow, before a final on Sunday.

The last class of the day on Arena 4 was Round 2 of the Chase Equestrian Opal Series. There were 72 combinations in the class with a massive 27 clear rounds. Fastest of these was Chloe Lockwood and Mingara Panda, in a time almost 3 seconds faster than second, finishing in 52.71 seconds. Second went to Zara Adnams and Dingmac Disco KING in 55.61 seconds beating Nora Palasthy and Kahean Trooper Diamond into third, finishing in 55.99 seconds. For these three competitions, there will be a third qualifying round tomorrow, prior to finals on Sunday.

It was a great day of jumping and the start lists for all finals to be conducted over the weekend have been determined. We are so looking forward to what promises to be a fantastic weekend of finals action.

Below are details of all the winners and placegetters for the day.
PRYDE’S EASIFEED MAIN ARENA