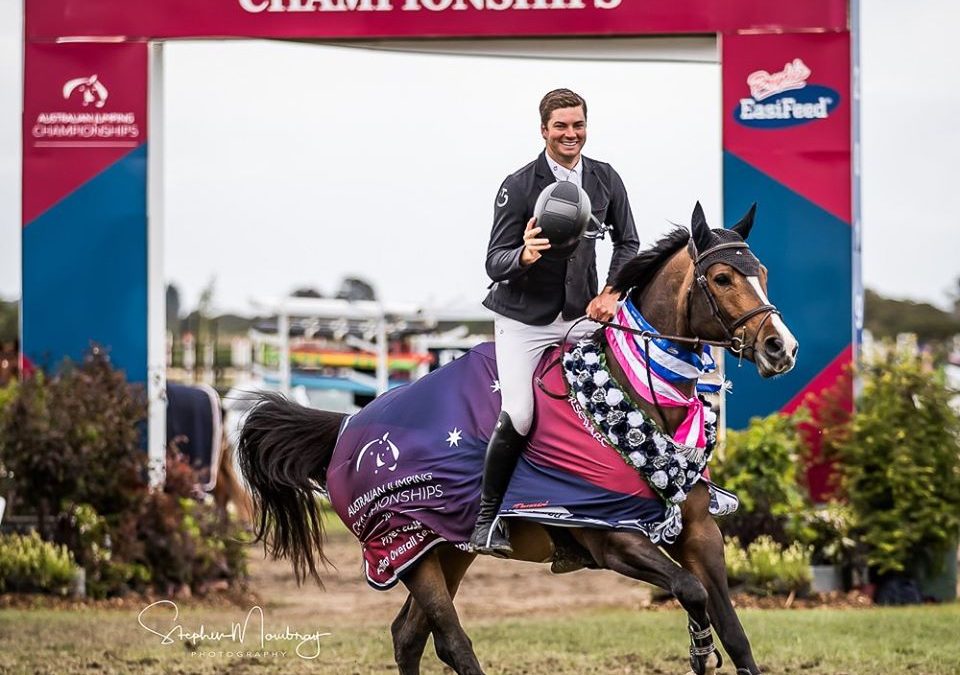 After five days of exciting competition, the Pryde’s Easifeed Australian Jumping Championships have concluded. Now that the jumping is over, it is time to take a look back at some of the highlights.

The headline event of the show was the Pryde’s EasiFeed Australian Senior Championship Final on Sunday afternoon. A crowd gathered in anticipation of an exciting competition and were certainly not disappointed. Some of the best horses and riders in the country gave it their all, in pursuit of the coveted title. After a thrilling jump off, it was Tom McDermott and his mare Elegance De La Charmille, going one better than their second placing last year, who rode to victory. Tom not only took home the biggest share of the prizemoney but was presented with the Len McVean Memorial Trophy and won a Tulara Warmbloods foal for his efforts.  Second place went to Queenslander Olivia Hamood and Jane Fonda DVD, with third going to the local combination of Russell Johnstone and Daprice.

The IRT Australian Young Rider Championship was taken out by Madeline Sinderberry and her mare Ciel. Sinderberry, who was the Junior Champion in 2018, only won after a three-way third round jump off against Jessie-Rice Ward and CP Southern Cross who were second and Amelia Douglass and Sirius Du Granit who took out third. In a splendid effort, Douglass also finished fifth and sixth on Upper Class Z and Cassis Z Ten Halven respectively.

The Horseland Australian Junior Championship was dominated by Sally Simmonds and her gelding Oaks Chifley. They won both rounds and went double clear in the final to demonstrate their superiority. Simmonds also took second place in the Championship on Chio MS with the NSW Junior Champion combination of Anneliese Wansey and KS Saint Patrick filling third.

In the teams event it was NSW all the way, with their state teams taking out the Junior, Young Rider and Senior Championships.

The Interpath Mini Prix Championship provided a wonderfully close final where the leading three could only be separated on times. James Arkins and Eurostar were the winners, with Olivia Hamood and Knock Out 111 taking second. Western Australian Georgie Siciliano and Gladiator P had to be content with third.

Later, on Saturday evening Katie Laurie and Dandelion found themselves on the top step of the podium, when they won the Riordan Fuels Australian Speed Championship. The Victorian combinations of Airlie Robinson and Yalambi’s Corlandia and Tori Stuckey and Finch Farm Cab Sav filled second and third spots beside Laurie on the podium.

In other Series, the BJS Insurance Opal series was taken out by the Victorian combination of Tilley Fair and Vivacious, while NSW Younster Charly Robinson-Smith and her gelding Wyann Shadow won the Peter Horobin Saddlery Pearl Series. Last, but not least, the Heiniger Ivory Series was taken out by Zara Adnams and her mare Elcarium Starlight.

So that’s a wrap for this year’s Australian Championships and we would like to thank everyone who contributed to making the show a such a success. In particular we thank all the sponsors that have made this year’s event possible through their generosity and continued support.

We look forward to hosting competitors from near and far next year for what will be the third edition of the Australian Jumping Championships to be held at Boneo Park in November 2020.